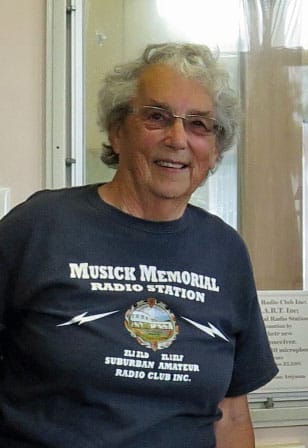 Ann was a founder and life member of NZART Branch 86 – Musick Point Radio Group, who died in Auckland, age 83.

Ann was born in Maroubra, Sydney and lived with her parents Clarence and Nellie, her grandmother Annie and her younger brother John. Growing up during the war years meant her early memories included gas mask drills, slit-trenches in the school yard, rationing and air-raid practices.

Maroubra is very close to Sydney Harbour. One night 4-year-old Ann and 2-year-old John heard explosions and saw lights in the sky. They thought it was wonderful – just like Guy Fawkes night – with bangs, flares and thunderous flashes. Ann and John couldn’t figure why their dad was so uptight. A couple of days later he took them down to the beach to see the washed-up wreckage. Two Japanese submarines had entered Sydney Harbour and got caught in the submarine nets. One sub was fired on by the Australian Navy, the other was scuttled by the Japanese submariners.

During the war, Ann and John travelled frequently to New Zealand with Aunt Olive. They travelled on hospital ships and flew over on a seaplane. They stayed with her maternal grandparents Mr and Mrs Parks at their farm in Onehunga. She loved visiting them and had vivid memories of their carthorse, Tommy, and that is probably where her passion for horses started.

When Ann was 8, the family moved from Australia to Auckland to be closer to Mr and Mrs Parks. They lived in Ellerslie and Ann attended Ellerslie Primary and Ōtāhuhu College where she studied agriculture and animal husbandry.

In 1951, when she was 13, Ann’s mother died suddenly. Nellie’s death upended life for Clarrie, John and Ann and a few years later, when she was 15, the three of them moved back to Australia, to South Johnstone, near Cairns in Queensland. Ann took herself off to Sydney to look for work and stayed with her Aunt Joyce and Uncle George Appleby. She got a job as a typist in the telegram department.

A few years later, at the age of 18, Ann was back in New Zealand where she would live for the rest of her life. She worked at John Courts store, in the accounts department, where she met her best friend, Elaine. That friendship led to her meeting Elaine’s brother, Ian, and they were married in November 1961 at Greyfriar’s Church in Mt Eden.

Ann and Ian had four daughters: Hazel, Leigh, Janet and Claire. The family moved to the Auckland suburb of Lynfield and here Ann’s resourcefulness, determination and physical strength were put to good use. As well as raising their daughters she and Ian juggled study and work with labouring on the house they built.

Ian’s enthusiasm for amateur radio developed into Ann’s hobby also, and she obtained the callsign ZL1TRH. The young hams got involved with Rally NZ and the World Rally Championships which took them all around the North Island.

In 2001, Ann and Ian led the efforts to preserve Musick Memorial Radio Station which had been unoccupied since the closure of Auckland Radio ZLD in 1993.

Their efforts resulted in the formation of an amateur radio club based at the station. Originally called the Suburban Amateur Radio Club, it is now known as the Musick Point Radio Group.

Following Ian’s death in 2010, Ann took on his callsign, ZL1BFB, and redoubled her efforts on behalf of Musick Point. She was a driving force in club activities, serving as the group’s secretary, treasurer and long-time newsletter editor until failing health forced her to stand down in April 2021.

Ann was committed to Branch 86. Her friends knew that if it was Wednesday or Sunday, Ann was likely to be at Musick Point. But she was also willing to drop everything and head to the Point at any time, if a visiting radio ham or historian or walking group expressed an interest in seeing the place, or if there was some emergency to deal with. She also spent a lot of time in the kitchen, providing refreshments and washing the dishes.

We miss Ann tremendously, and remember her with gratitude and affection.