The Gibson Girl emergency lifeboat transmitter is a compact unit comprising a hand generator, wires for antenna and earth and two wide webbing belts that strapped the unit to the operator’s upper legs.

The Gibson Girl was mainly used during WW2 for the rescue of allied troops shot down or sunk while at sea, and then later in the 1960s used on pleasure yachts that cruised the Pacific and other oceans.

These radios were sometimes the only form of communication available in cases of emergency on these vessels. In cases of disaster or distress Auckland Radio Receiving Station during its operational life received a few calls from these radios and was able to assist in the location of the victims. This was when the Marconi DF was in operation.

In the early 1960s the minimum requirement for yachts on the Pacific races was one of these small emergency transmitters which were available as surplus in Army Surplus Stores.

It was expensive to fit AM radios in those days. I recall that during my term as a Radio Inspector, one such set was recorded as being on two vessels at the one time. Fortunately it was never used.

The Gibson Girl was supplied in lifeboats on the early passenger ships. The SCR-578 came with an assortment of extras such as a kite which was attached to the antenna so as it could be extended as far as possible and an earth line that could be lowered into the water.

These sets were sometimes dropped from aircraft to stricken sailors by parachute so they could communicate.

The original idea of these transmitters came from the “Notsender”, or NS2, made in Germany. So efficient was it that the British copied and improved the design.

Later it was passed on to Bendix Aviation in the USA, and Radio Set SCR-578-A was born. They were used in many aircraft and ships during the war and hence the great surplus later. 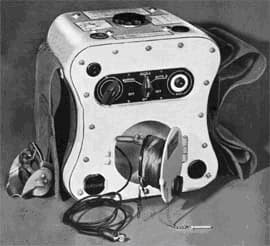 The name Gibson Girl comes from its hour-glass shape, as portrayed in the pen-and-ink illustrations of fashionable American women by Charles Dana Gibson.

It was operated whilst strapped to both legs using the broad weave strap to give comfort to the operator, while grinding the generator with the crank handle, which was part of the equipment. It was designed to be rotated with the left hand, to activate the generator, while the right could operate the CW “Key” or button.

There was no receiver. The unit could also be switched into the automatic send position and transmit the SOS message and the DF signal.

There were many manufacturers’ modifications to the unit such as a hydrogen balloon and the 260 metres of fine braided antenna wire, which was on a drum that could wind it out. And a short wire with a weight for the earth line.

Thie unit on display at the Musick Memorial Radio Station gives an illustration of the type of marine emergency radios used, its size and weight and the type of operation.

The circuit as shown is very simple in construction. I doubt if the valves are available as spares today. The operating frequency is 500 kHz.