A 1985 episode of the children’s television show Terry and the Gunrunners was filmed at Musick Point. (You can watch the episode in two parts at the bottom of this page.) 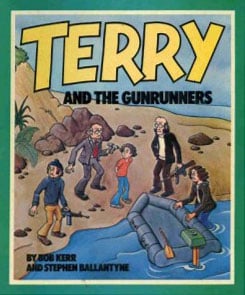 Terry Teo, the young skateboarding hero of the children’s TV serial Terry and the Gun Runners, overhears a dastardly plot involving one group of bad guys planning to overthrow the gunrunners, whose headquarters were in a large house with a fantastic sea view – a building that looks a lot like the Musick Memorial Radio Station!

The filmmakers sought approval from Fred Gates, who was manager of the station, to use Musick Point as the location for the filming of the series. Approval was granted on condition that they left the grounds as they found them and did not interrupt the normal services of the station.

They pitched a big marquee in the then unsealed carpark at the top of the drive. This was used primarily as a canteen. During the day, the catering staff wandered around with plates of goodies for the crew to snack on. Fred said they put on some great feeds, and he had a standing invitation to lunch each day.

The main stars had their own caravans, also parked in the carpark.

The whole crew worked long hours, starting about 7am and finishing around 5-6pm.

The roof of the western wing of the building was set up with sand bags, “machine guns” and other battlement items such as barbed wire (it all looked very real!). The building was disguised slightly with red and white striped awnings and artificial grass on the front steps.

One of the final scenes in the film, called for the building to be blown up. This was very spectacular and the explosion’s fireball was set off from the contents of a rubbish bin in the front courtyard, by remote control from the top of the drive.

The lid of the bin was found some days later on the shore below the cliffs towards Eastern Beach. Pity about the rubbish bin; it was found to be useless for its intended job after the exercise.

The “explosion” at Musick Point drove back a Police attempt to enter the beach house of a property tycoon and gun smuggler, Ray Vegas, during filming of a children’s television series. By arrangement with the Post Office, the setting was provided by Auckland Radio and its surrounding park.

Fred Gates, manager of Auckland Radio had a few worried moments. “They first did a trial explosion in the middle of the paddock,” he said of the enormous explosion and fireball. That didn’t do anything to ease my mind”. He began wondering how he would explain the disappearance of his building to the Director-General. However, there were no real problems during the ten days the station was on camera and Fred says he’s pleased to report there was no damage at all.

“The film crew won full marks and generally took care of the grounds during their stay.” Any why did Musick Point suddenly become a gangsters beach house? “They were looking for a building which would look like a mansion, in a relatively isolated area, with trees and grounds”. Auckland Radio fitted the bill perfectly it seems.

Watch Terry and the Gunrunners