Staff have been occupied with re-cabling and jumpering as a result of the re-routing of all the circuits that previously went to Auckland via the undersea cable to St Heliers being now routed via Tamaki-Ellerslie. The underwater cable to St Heliers is literally on its last legs and will preferably not be repaired again.

Authority for the reconstruction of Auckland Radio has been obtained and the equipment is to be replaced with modern equipment suitable for unattended operation.

The annual calibration of the old Marconi DF receiver was carried out during a recent spell of cold but fine weather. The spread of houses into what, a year or two ago, was farmland, has caused the loss of more of our test pegs and caused a bit of head-scratching at times. The calibration of the sea sectors was held up occasionally by fog and the need to top trees on the cliff edges. No news yet about bringing the Telefunken set into use.

The working frequency on our main marine transmitter was changed from 524 kc/s to 432.5 kc/s on 8th June for a month’s trial. This was not a happy choice however, as the fifth harmonic of this new frequency appears on 2162.5 kc/s on the small ships to Auckland Radio frequency. Putting traps in the aerial feeders at the transmitting station reduced the level of this harmonic at the receiving station to just under ten microvolts, a tolerable level on this service. 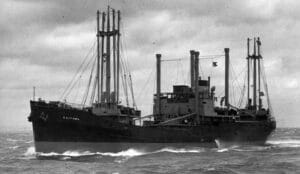 At 8.59pm on 23 May, Auckland Radio received a weak PAN PAN PAN call on 2182 from the Union Steam Ship Co collier Kaitawa. A minute later, the radio officer on Kaitawa sent a MAYDAY message, part of which was inaudible due to static and fading. Nothing further was heard. The collier sank near Cape Reinga with the loss of all 29 men aboard.
See more at maritimeradio.org.

“It looks like the tech is probing the high voltage parts with a neon stick to ensure the volts were dead prior to working on the transmitter. He seems to be keeping his other arm behind as we were trained to do to avoid getting plated.”
– Ralph Sanson

At 4.05 pm on 13 June, Auckland Radio ZLD received a PAN (Urgency) radiotelephone message from the coastal freighter MV Maranui, after the vessel’s cargo of bulk wheat shifted in a severe storm:

Another call was made to Auckland Radio ZLD at 5.03 pm:

Through outstanding seamanship in extreme conditions, the captain of Mirrabooka picked up six crew from Maranui‘s liferaft, but nine others were swept away to their deaths.